An interesting "What if" scenario. 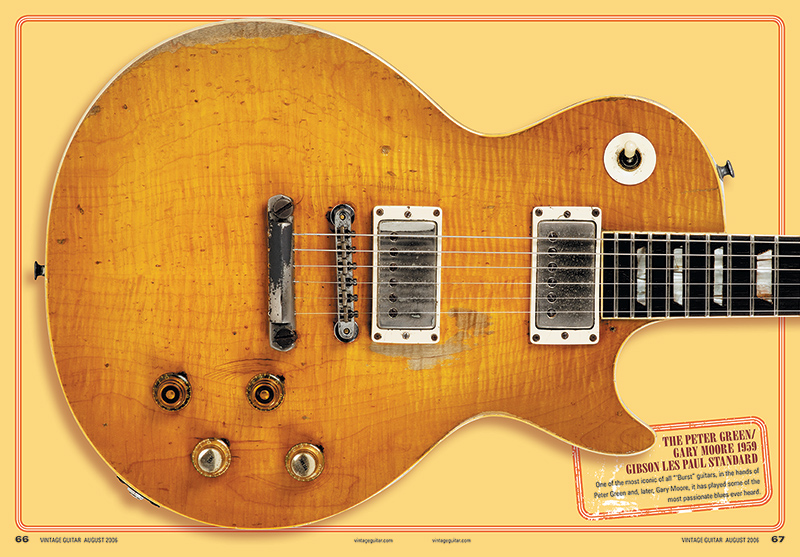 Everyone who knows about Peter Green as a guitarist knows about his famous “PG Mod” out of phase tone. While not very well accepted by the general population of guitarists, anyone who is a fan of Peter Green is interested in the unique tone.

But, I often ask myself, “What if Peter had a typical Les Paul that didn’t have the necessary resonance and sustain needed to pull off the out of phase tone properly?” What then? Well, I suspect there would be no Peter Green out of phase tone to be chasing! Let me explain…

Having been totally into the out of phase tone since I first heard Peter play it (Merry Go ‘Round on the Dog & Dustbin album), I was able to finally have my first experience with it in 1971. A good friend of mine, Peter Montagna, was lucky enough to have a dad who was into woodworking. Somehow, Peter found out about how to get the out of phase tone by manipulating a magnet in one of the humbucking pickups. I didn’t have a Les Paul at the time (I was using an SG), so we decided it would be best to get the Peter Green tone from an actual Les Paul. So, we headed to 48th St. in Manhattan on a quest to find a Les Paul.

Of course, original 50’s Les Pauls were scarce, and I probably wouldn’t have been able to afford one anyway, but there was hope because of Gibson’s recent decision to make “real” Les Pauls again in 1968. We found one of them, a P90 Goldtop, at We Buy, where I traded my SG and some cash for the guitar. Since Peter’s dad had all the necessary equipment to route the guitar for humbuckers, that wasn’t an issue. After doing the deal at We Buy, we went across the street to Manny’s and bought a set of humbuckers. To make a long story short, when the guitar was ready, there it was – perfect Peter Green out of phase tone! I thought, “well, that was easy,” and just assumed that I could get that tone from any Les Paul going forward. That turned out to be a very bad assumption.

Several month later, while reading the “Buy Lines” classified newspaper, I saw an original Burst for sale, for something like $600. I thought, “man, I really need that guitar. This one we made is fantastic sounding, but an original one like Peter’s has to be even better, right?” So, after finding a buyer for my LP, and borrowing what I needed from my band members, who were quite sympathetic to my Peter Green obsession, I was able to come up with $550. I went to the guy with the Burst (a real jerk, actually) and got him to agree to let me have the guitar for all the money in my pocket – $550!

Peter and I went through the procedure to open up the neck pickup and flip the magnet. Great excitement in the air as I fired up my blackface Twin Reverb and starting playing some Peter Green licks out of phase. The result was total shock! The guitar sounded like crap. Out of phase was thin and weak, and there was no sustain at all. I just couldn’t believe it. What the heck was wrong? I was totally bummed, and more bummed when I tried to talk the buyer of my Gold Top into selling the guitar back to me. He just wouldn’t do it. So, there I was, stuck with a guitar that would not play out of phase satisfactorily at all. Of course, even not out of phase the guitar was pretty much dead sounding and nothing like the Gold Top.

At the end of summer 1971, I decided that I was going to follow my girlfriend and her brother down to Miami and go to school there. My band decided they were going to follow as well, and took up residence at a hotel on the beach. There wasn’t much happening with gigs for us, and after a short time, when rent was due, my bandmates, without my knowledge, sold the Burst. Got $850 for it! That was about the only thing that was good about the guitar – made some nice profit on it! I was kind of pissed that they did it without telling me, but truly, I had no love for the guitar and I wasn’t going to miss it. I went to a music store in Miami and bought a Tele as a replacement. The band then moved back home to New York and that was the end of that. I stayed in Miami with my Tele.

Several years later I was back in New York and making some money (not as a musician). I decided it was time to ditch the Tele and contact Peter Montagna about trying to make another Les Paul. I don’t remember if we found one with humbuckers (Gibson had started making LPs with humbuckers again by the time) or another with P90s that had to be routed. I do remember that Peter stripped the guitar and glued a thin piece of curly maple veneer on the top and painted it Cherry Burst. Looked great!

Unfortunately, the result was pretty much the same as the Burst. This one was a little better, but still not satisfactory and nowhere near as good as the routed P90 Gold Top. We decided to try an experiment and see if the electronics from the Gold Top were responsible for the severe difference in tone. I was able to borrow the Gold Top and we went about trying our theory. Nope – those electronics sounded nothing like they did in the Gold Top installed in this new project guitar. The only conclusion was that it was the guitar itself that was responsible. Something about it was just different. Acoustically, the P90 guitar was extremely resonant with enormous sustain, whereas the Burst and this other LP had very little resonance and sustain. I then sold that guitar and bought an L6-S, which had a varitone and did the out of phase tone decently. A few years after that, I pretty much stopped playing guitar for the next 25 years, only to pick it up again in 2002, and start my quest for a Les Paul that would do great out of phase. It was an eye opening experience that you can read about in some of my other blog posts.

Looking back on this this I find it a coincidence that both Peter Green and I, on the first try, had guitars with enough resonance and sustain to make out of phase work well. This is where the “What If…?” scenario comes into play. I am convinced that, if Peter Green’s Burst was like most others, it would have not had enough resonance and sustain and he would have had the pickups put back in phase after trying it, or, at the very least, he would have avoided playing the guitar in the middle position and there would be no “Peter Green” out of phase tone for us to chase! Thankfully, that was not the case, and I was able to confirm the acoustic resonance of his guitar when I was lucky enough to have the guitar in my own hands for around an hour back in April, 2007.

The conclusion was obvious: a Les Paul needs to be unusually resonant to be effective out of phase, and such guitars are a rarity. Until, that is, Gibson made the “Standard Faded” model from 2005-2008. Those guitars made the light bulb go off in my head. ALL of those I encountered were extremely resonant and all of them were able to handle out of phase beautifully. Why were they so different than other Les Paul models, the majority of which just didn’t cut it when it came to resonance? Because they were made to be inexpensive, saving huge costs in the finishing process. They used no grain filler in the mahogany and only a few coats of satin lacquer to seal the stain. That, my friends, is the very simple answer to the mystery. Grain filler and lots of lacquer effectively kill the inherently great resonance of mahogany.

Unfortunately, Gibson discontinued the Faded after 2008. Fortunately, Corsa Guitars was born to fill that void and makes all its guitars the correct way for tone. Never will you find a Corsa Guitar that uses grain filler. Knowing what we know, doing so would be morally wrong. Intentionally destroying a guitar’s tone so that it appeals to the eye rather than the ear is something we would never do. A guitar is supposed to be a “musical” instrument, not a piece of furniture. ‘Nuff said.