The Evolution of "The Pack"

I’ve always been about tone. Always. Or, to be more precise, when I first heard Peter Green’s out of phase tone about 50 years ago. Wow, never thought about it in those terms, but that really makes me feel old!

I talk about my quest for the tone in another blog post, so I’m not going to repeat it here. What I do want to talk about is the evolution of Corsa Guitars.

Very simply, since tone is the name of the game for me, when I discover better tone and find a platform to deliver that tone at a reduced cost, it makes no sense to me to look backward. This post will be my attempt to convey what I have learned and why I am going in this new direction.

It may seem corny, but this whole new project started to take shape in my mind after watching a video about Peter Green’s guitar collection. At one point he talks about one pickup guitars. He doesn’t articulate his feeling about it in a very precisely thought out way, but I think that’s because it is not easy for him to explain it. But, it’s very “Peter Green!” Have a look at the section from the video and you will understand. Or not!

Without thinking too much about the merits of Peter’s thoughts, I did come away from that thinking about building a one pickup guitar. Naturally, the first guitar that came to mind was the LP Junior. I then started to think about how I could expand on the Jr concept, employing construction techniques I know are critical to enhanced resonance and sustain. Using just a a solid mahogany body was out of the question, and I decided that a chambered mahogany body with a maple top would be the way to go. Just to keep it “something” like a junior, I decided it should be about the same overall thickness as a Junior. A 1/4″ thick flat piece of maple over the chambered mahogany body is what I settled on.

Using a wraparound bridge was a given. And, although I had made a couple LCPG and Manalishis with wraptails that had killer sustain, it finally dawned on me just how much better wraptails are for sustain. I don’t want to go off on a tangent here about why the stoptail/tune-o-matic combination was a bad solution for a relatively easy problem. That discussion can be for another time. Suffice it to say that the simplicity of wraptails makes for better sustain. 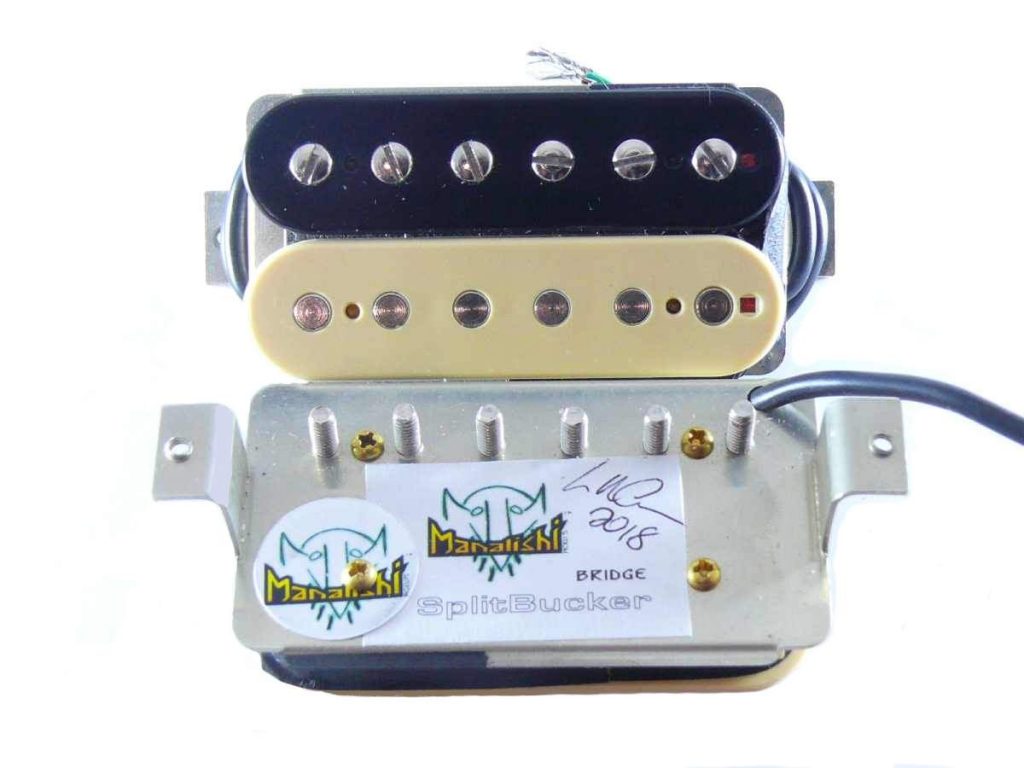 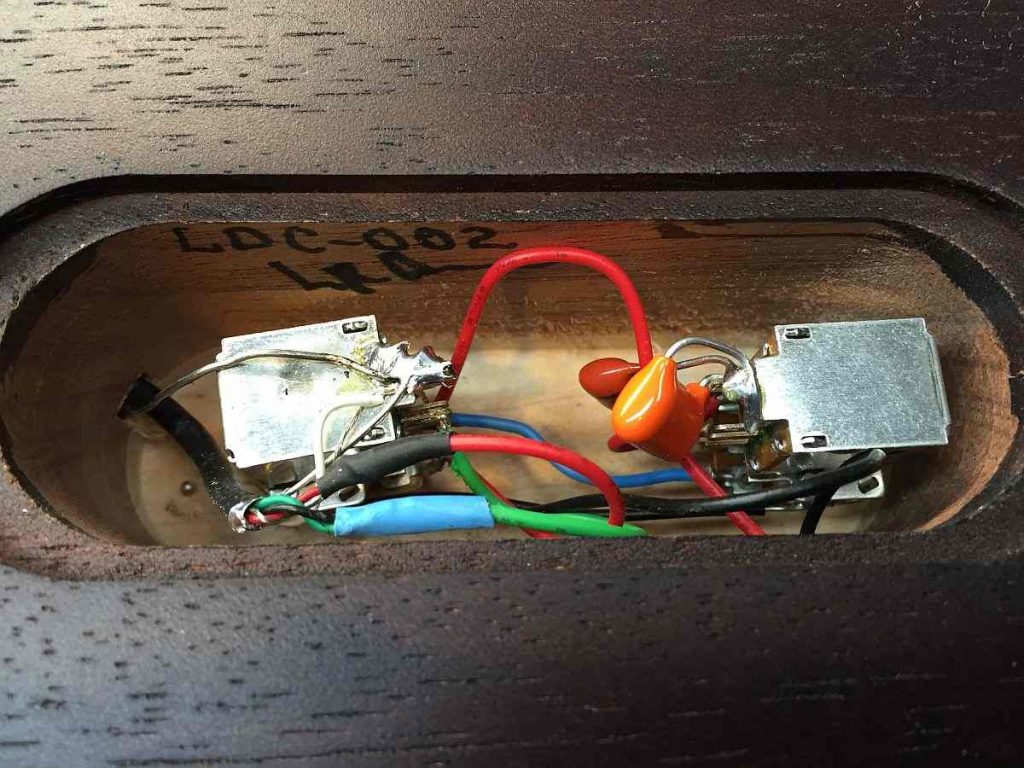 I didn’t want to use just a P90 on the guitar. Many Junior owners from back in the day switched to a humbucker, not only to get rid of the 60 cycle hum, but to get a little more juice out of their guitars. So I wanted to do the same. But, I was after even more. I thought about doing a coil split, but I’ve never liked the sound of a split humbucker. 4K is just too weak for my taste. Then I had the thought, why not wire one of the coils at 6K and the other at 2K, giving average humbucker total output of 8K? I would then split to the higher output coil. 6K is decent. Not as strong as the typical P90, but in Strat and Tele single coil territory. So, from that the Manalishi “SplitBucker” was born.

Being the Peter Green tone freak that I am, of course I was disappointed that this new creation couldn’t be out of phase with only one pickup. I discussed this with someone and I was told about the “cocked wah” tone. This made sense to me because way back in the day, before I learned how to do the “PG Mod,” it was possible to simulate the out of phase tone by finding a sweet spot on a Wah Wah pedal. I found a schematic showing how to wire two different caps on a push-pull to get the cocked wah tone. This schematic was using a .0047 cap for the cocked wah, so I wired up a push-pull with a .022 for normal tone, and a .0047 for cocked wah. It had the”quacky” tone, but it was much too bassy sounding. I tested a bunch of different value caps and decided that .0027 was best.

The first Little Dog proto I made was just remarkable and so much better than I thought it would be. Resonance and sustain were off the charts – reminiscent of a great sounding 335. The tones I could get from the single pickup were incredible, thanks to the decent split and the cocked wah. So much goodness from one pickup! Between the two Protos, regular Little Dogs and Little Dog Customs I made and sold, my customers raved about them. Most had the same great feeling about them that I did.

I then decided this stuff was so good, it made sense to make dual pickup variations using the same body construction as the Little Dog. Having the success of the higher output coil splitting, thanks to the SplitBucker, it made sense to use them on the new two pickup guitars. And, since the cocked wah is such a cool little trick, I carried that over as well. Phase changing was also added, and this whole wiring scheme is what I dubbed, “Mass.Effect.” Four 500K push-pulls to control everything in a smart and intuitive combination.

One surprising and very welcome thing happened. I was really happy because with the two pickups I could have true out of phase. But, activating the cocked wah cap while out of phase added a lot to the tone! It makes for a much beefier sounding out of phase. Not that this is true to Peter Green’s screeching out of phase, which is important and doable. “Cocked Wah Out of Phase” just adds a whole new dimension to it, if that’s what you want.

So, from the Little Dog, “The Pack” grew to include the Big Dog and Fury models. So satisfying tonally that I wanted this to be my main focus going forward. At the risk of shooting myself in the foot, when it comes to tone, there’s nothing that can touch these guitars, including my own carved top models, in my opinion. If a player absolutely must have a LP style guitar, of course the Manalishi is the only choice, if tone is the most important factor. 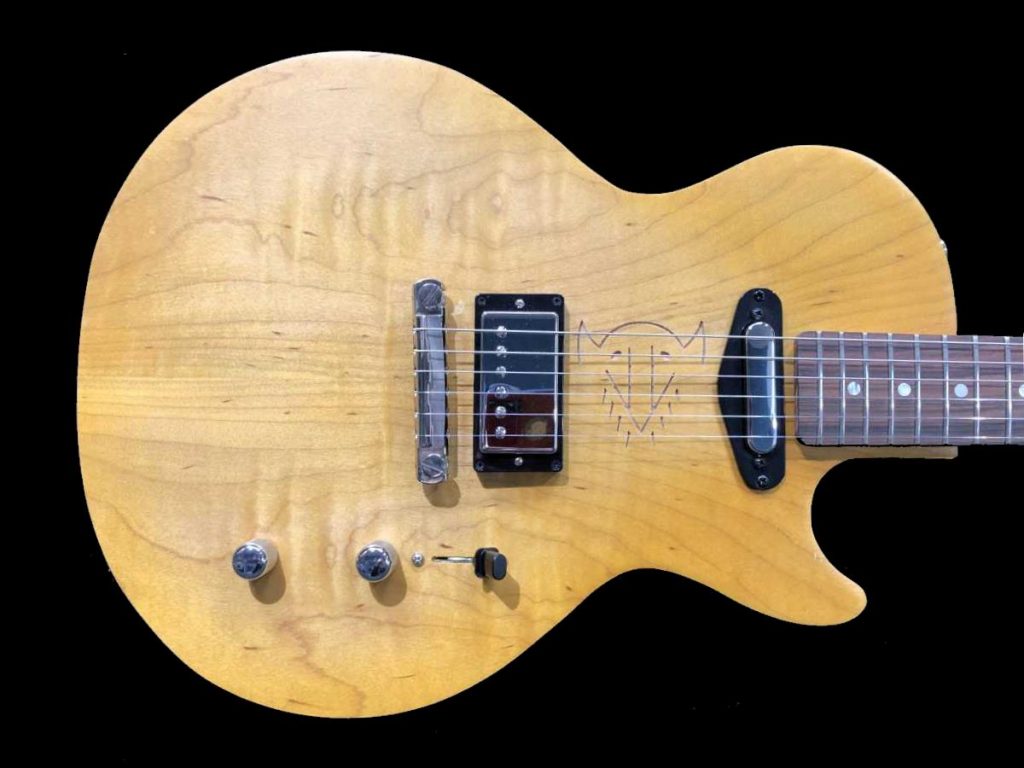 The Dingo will be the next offering in “The Pack.” I made this Prototype with the same body construction as the other Pack models, chambered mahogany body with 1/4″ maple top, but with a bolt on maple neck. Using a standard Fender Tele neck pickup and a Manalishi SplitBucker at the bridge, the pots are master volume and master tone on push-pulls. The volume push-pull splits the Splitbucker and the tone push-pull is set up for “cocked wah.” On this one, it is wired permanently out of phase in the middle position of the typical Tele style 3-way switch. It has the typical massive resonance and sustain of it’s siblings.

I’m in the process of making a second prototype, this time using a chambered swamp ash body with 1/4″ maple top. This time, though, for the electronics I’m going to try doing  phase change on the tone push-pull, which would make it possible to be more “Tele like” when in phase with the switch in the middle position. The out of phase tone on the first prototype is sweet, so I’m thinking having this option is probably more useful than having the tone pot do cocked wah. We shall see!

Once the 2nd Proto is done I will compare and see which of the body woods, mahogany or swamp ash, sounds closer to a Tele. As soon as I have the time, I’ll make a post a video of the 1st Prototype. In any event, I think the Dingo will be an important addition to “The Pack!”